A medium-specific piece utilising NewHive’s new publishing platform by combining an excerpt of the first chapter of “The Work of Art In The Age of Mechanical Reproduction” with animated GIFs. Walter Benjamin’s essay became a critical point within my research on the evolution of the photographic medium. Benjamin’s words heavily resonate with the current landscape of infinite reproducibility instigated by the latest form of automation; the computer.

The culture machine, dubbed by critics and theorists such as Peter Lunenfeld and Gary Hall, is gradually replacing mechanical automation with electronic. The animated GIF is a culmination of all practices established and knowledge accumulation before the age of computer systems and networks.

Its form is expressing the notion of infinity, which does not associate with natural but artificial. In reality this is a false notion since the systems underpinning the GIF are entirely depended on natural resources, therefore their ability to operate and reproduce endlessly adheres to this fact.

The interactive page serves as a proof of concept on a new form of web-based text. I had the privilege of a library to obtain a copy of the essay, and several academic sources online with more accurate translations. The Penguin version does not offer the best possible translation, while online sources present the text in a 90’s edge-to-edge style, rendering the text hard to read.

By now it is a common practice in web design to use bigger text size, breaking free from the standard 14-16 pixels and the 10-12 points for the print medium. Kerning and line height are equally important to the readability of text. Fonts have become more popular, and the ability to embed them on a web server makes web-safe fonts an old standard. By now, we know that the screen is not the best medium to read long text and all these measures contribute towards this deficiency.

The visual design is composed of 6 blocks, each one acting as a reference to a book chapter. Every block consists of 80 animated GIFs representing a paragraph or other divisions within the text. The blocks and GIFs don’t necessarily correspond Benjamin’s essay, but point towards a possible concept. Ideally each GIF is wrapped within an a tag, thus creating a visual hyperlink to a bookmark within the HTML document or  another webpage.

The animated GIFs are created from video frames of a random video on YouTube, scaled down to the desired size, while using a 3 colour palette. All GIFs are the same infinite loop animation with different colours assigned to them. NewHive’s blank canvas and tools were instrumental to this piece. Each of the 6 different GIFs were uploaded once, then replicated and aligned using the platform’s WYSIWYG editing interface. The fonts used are Novecento for the title and Lato for the body, both provided by the platform.

The expression, NewHive’s label for interactive pages, was featured on the platform and also mentioned in a feature story on NewHive by Casey Newton on The Verge.

Click on the image below to visit the original animated version. 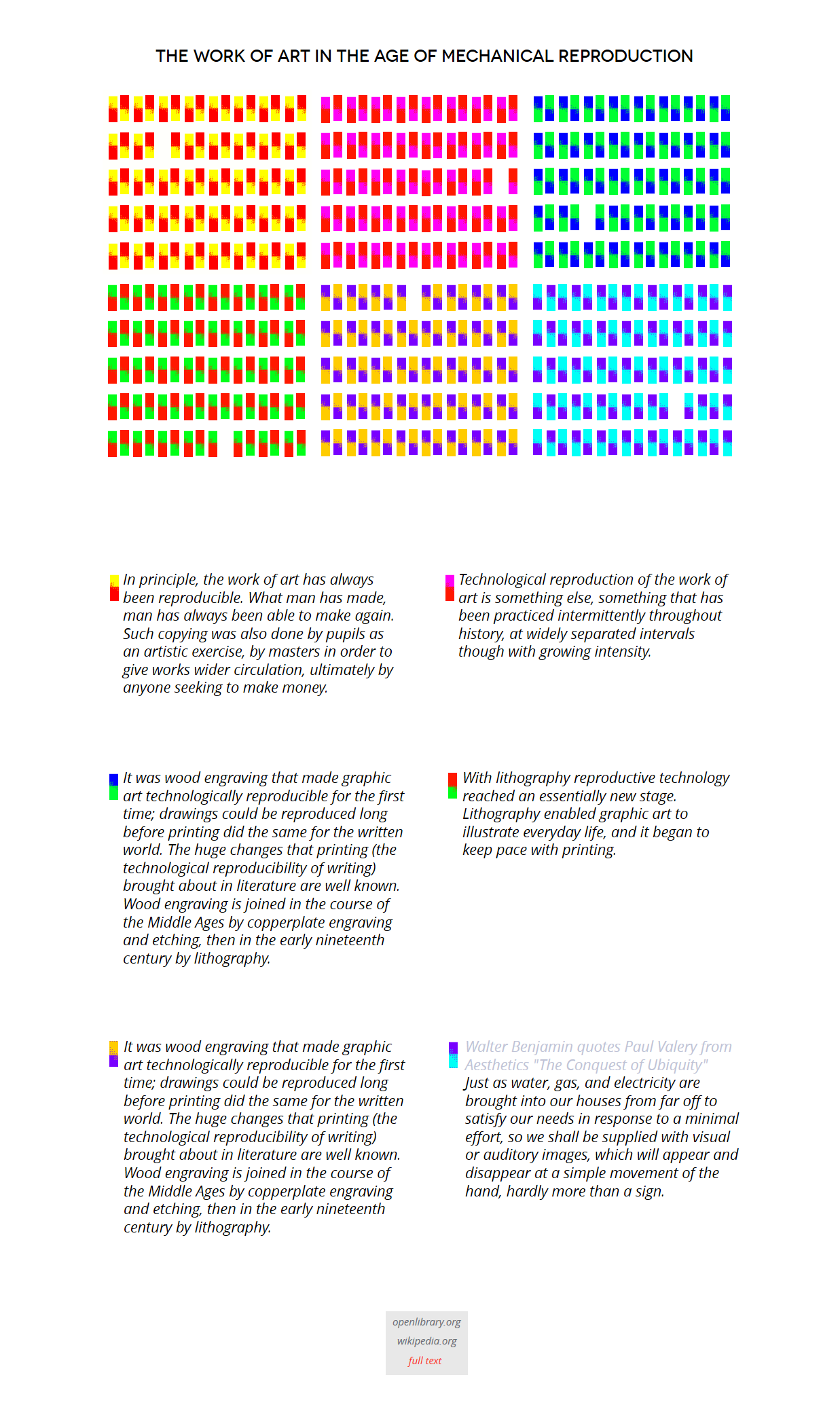 “The Work of Art in the Age of Mechanical Reproduction” A tribute to Walter Benjamin by @joseph_kes http://t.co/AlhCYLjp3z